Catalog The Blythes are Quoted »  eBook » 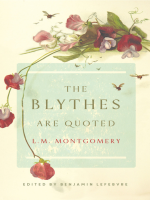 Description
Adultery, illegitimacy, misogyny, revenge, murder, despair, bitterness, hatred, and death—usually not the first terms associated with L.M. Montgomery. But in The Blythes Are Quoted, completed shortly before her death and never before published in its entirety, Montgomery brought these topics to the forefront in what she intended to be the ninth volume in her bestselling series featuring her beloved heroine Anne. Divided into two sections, one set before and one after the Great War of 1914—1918, The Blythes Are Quoted contains fifteen episodes that include an adult Anne and her family. Binding these short stories, Montgomery inserted sketches featuring Anne and Gilbert Blythe discussing poems by Anne and their middle son, Walter, who dies as a soldier in the war. By blending poetry, prose, and dialogue, Montgomery was experimenting with storytelling methods in ways she had never before attempted. The Blythes Are Quoted marks the final word of a writer whose work continues to fascinate readers all over the world.
Also in This Series