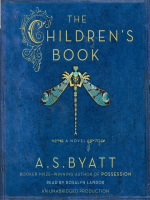 Description
A spellbinding novel, at once sweeping and intimate, that spans the Victorian era through the World War I years, and centers around a famous children's book author and the passions, betrayals, and secrets that tear apart the people she loves.When Olive Wellwood's oldest son discovers a runaway named Philip sketching in the basement of the new Victoria and Albert Museum—a talented working-class boy who could be a character out of one of Olive's magical tales—she takes him into the storybook world of her family and friends.But the joyful bacchanals Olive hosts at her rambling country house—and the separate, private books she writes for each of her seven children—conceal more treachery and darkness than Philip has ever imagined. As these lives—of adults and children alike—unfold, lies are revealed, hearts are broken, and the damaging truth about the Wellwoods slowly emerges. But their personal struggles, their hidden desires, will soon be eclipsed by far greater forces, as the tides turn across Europe and a golden era comes to an end.Taking us from the cliff-lined shores of England to Paris, Munich, and the trenches of the Somme, The Children's Book is a deeply affecting story of a singular family, played out against the great, rippling tides of the day.
Also in This Series