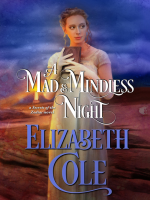 Description
A rogue in search of a new life, a brilliant woman betrayed, and one path through a prison of lies...Ashley Allander has been a rake, rogue, scandalmaker, and heartbreaker. Now, with one last chance to redeem his name, he becomes a spy. The Zodiac's newest recruit leaves London behind to find an elusive inventor, but his target proves far stranger. Ash discovers an aloof host, bright lights in the sky, and a woman who is either an innocent prisoner...or completely mad.Elanora Morrison is desperate. Her life's work has been stolen from her. She's been declared insane and kept far from anyone who might help. She gambles everything on a mysterious newcomer, risking her reputation, her life, and her heart to regain her freedom.Together, Ash and Nora hold the key to a conspiracy between two warring nations. In the midst of danger, they find an improbable love, and the chance for a new future...if they live long enough to reach it.The sixth novel in the Secrets of the Zodiac, a series of full-length historical romances: Featuring sexy storylines, complex characters, and international intrigue, set against the backdrop of the Napoleonic Wars.
Also in This Series