Storm lake: a chronicle of change, resilience, and hope from a heartland newspaper
(eAudiobook) 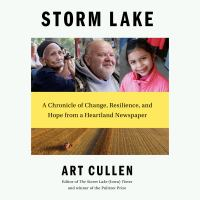 Description
"A reminder that even the smallest newspapers can hold the most powerful among us accountable."-- The New York Times Book Review Iowa plays an outsize role in national politics. Iowa introduced Barack Obama and voted bigly for Donald Trump. But is it a bellwether for America, a harbinger of its future? Art Cullen's answer is complicated and honest. In truth, Iowa is losing ground. The Trump trade wars are hammering farmers and manufacturers. Health insurance premiums and drug prices are soaring. That's what Iowans are dealing with, and the problems they face are the problems of the heartland. In this candid and timely book, Art Cullen--the Storm Lake Times newspaperman who won a Pulitzer Prize for taking on big corporate agri-industry and its poisoning of local rivers--describes how the heartland has changed dramatically over his career. In a story where politics, agri­culture, the environment, and immigration all converge, Cullen offers an unsentimental ode to rural America and to the resilient people of a vibrant community of fifteen thousand in Northwest Iowa, as much sur­vivors as their town.
Also in This Series

General Note
Downloadable audio file.
General Note
Title from title screen.
Restrictions on Access
Access restricted to subscribing institutions.
Participants/Performers
Narrated by Chris Henry Coffey.
Description
From a 2017 Pulitzer-winning newspaperman, an unsentimental ode to America's heartland as seen in small-town Iowa'a story of reinvention and resilience, environmental and economic struggle, and surprising diversity and hope. When The Storm Lake Times, a tiny Iowa twice-weekly, won a Pulitzer Prize for taking on big corporate agri-industry for poisoning the local rivers and lake, it was a coup on many counts: a strike for the well being of a rural community; a triumph for that endangered species, a family-run rural news weekly; and a salute to the special talents of a fierce and formidable native son, Art Cullen. In this candid and timely book, Cullen describes how the rural prairies have changed dramatically over his career, as seen from the vantage point of a farming and meatpacking town of 15,000 in Northwest Iowa. Politics, agriculture, the environment, and immigration are all themes in Storm Lake, a chronicle of a resilient newspaper, as much a survivor as its town. Storm Lake's people are the book's heart: the family that swam the Mekong River to find Storm Lake; the Latina with a baby who wonders if she'll be deported from the only home she has known; the farmer who watches markets in real time and tries to manage within a relentless agriculture supply chain that seeks efficiency for cheaper pork, prepared foods, and ethanol. Storm Lake may be a community in flux, occasionally in crisis (farming isn't for the faint hearted), but one that's not disappearing'in fact, its population is growing with immigrants from Laos, Mexico, and elsewhere. Thirty languages are now spoken there, and soccer is more popular than football. Iowa plays an outsize role in national politics. Iowa introduced Barack Obama and voted bigly for Donald Trump. Is the state leaning blue, red, or purple in the lead-up to 2020' Is it a bellwether for America' A nostalgic mirage from The Music Man, or a harbinger of America's future' Cullen's answer is complicated and honest'but with optimism and the stubbornness that is still the state's, and his, dominant quality.
Additional Physical Form
Downloadable applications available for access via iOS 4.0+ devices (iPhone, iPad, iPod Touch) and Android 2.1+ devices.
System Details
Mode of access: World Wide Web.
System Details
Requires RBdigital Media Manager.
System Details
System requirements: 200 MB of free disk space, 512 MB of RAM, Windows Installer 3.1, Microsoft .NET Framework 4 (x86 and x64), Windows Media Player 10 QA.
Similar Series From NoveList
Similar Titles From NoveList
Similar Authors From NoveList
Borrower Reviews
Librarian Reviews
Published Reviews
Citations
APA Citation (style guide)

Note! Citation formats are based on standards as of July 2010. Citations contain only title, author, edition, publisher, and year published. Citations should be used as a guideline and should be double checked for accuracy.
Staff View
Grouped Work ID:
76902295-0e45-2991-326f-85bb9d5953c5
Go To GroupedWork