Catalog The voyage of the Dawn Treader »  eAudiobook »

The voyage of the Dawn Treader
(eAudiobook) 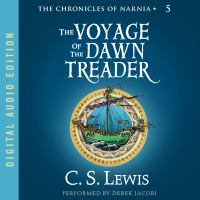 The unabridged digital audio edition of The Voyage of the Dawn Treader, book five in the classic fantasy series, The Chronicles of Narnia, narrated by Emmy Award-winning actor Derek Jacobi.

The Dawn Treader is the first ship Narnia has seen in centuries. King Caspian has built it for his first voyage to find the seven lords, good men whom his evil uncle Miraz banished when he usurped the throne. The journey takes Edmund, Lucy, their cousin Eustace, and Caspian to the Eastern Islands, beyond the Silver Sea, toward Aslan's country at the End of the World.

The Voyage of the Dawn Treader is the fifth book in C. S. Lewis's classic fantasy series, a series that has been drawing readers of all ages into a magical land with unforgettable characters for over sixty years. This is a novel that stands on its own, but if you would like to continue to the journey, read The Silver Chair, the sixth book in The Chronicles of Narnia.

Note! Citation formats are based on standards as of July 2010. Citations contain only title, author, edition, publisher, and year published. Citations should be used as a guideline and should be double checked for accuracy.
Staff View
Grouped Work ID:
545bc785-34f6-42d1-4a82-8b346ec74397
Go To GroupedWork