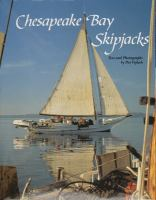 Description
Chesapeake Bay Skipjacks documents the skipjack and its role in the oyster dredging industry, describing the natural and manmade disasters that affected the trade, including the August storm of 1933 that swept vessels into pastures; ice-locked harbors that led to the idea of dredging through the ice with sleighs, cars, and trucks; and the Great Depression that crushed the oyster market overnight and forced many to abandon their vessels and way of life. The history of the skipjack, a vessel type that has only existed for about a hundred years, is seen here primarily through the eyes of the men who lived it. Author Vojtech interviewed some thirty captains, former captains, crew members, and relatives of those who worked the boats, to recreate the events that took place between 1917 and 1993. The early years were reconstructed through research into Maryland's dredging records and contemporary newspapers accounts. Today, disease and other environmental hazards affecting the oyster have made the commercial future of the skipjacks on the bay extremely uncertain, underscoring the need to record the lore of those who manned this diminishing fleet and to emphasize the vessel's place in the history of the Chesapeake region. In this readable account, skipjack captains and crews vividly recall their personal troubles and near disasters as well as more widespread hardships that watermen have faced: storms that swept vessels into pastures, long cold spells when they were forced to dredge through the ice with sleighs (and later automobiles), and the Great Depression that crushed the oyster market overnight. More than anything, though, this is a story of men who loved to sail and who often risked their lives, balanced on the edge of danger, to harvest the Chesapeake's most valuable cropâthe oyster.
Also in This Series

Note! Citation formats are based on standards as of July 2010. Citations contain only title, author, edition, publisher, and year published. Citations should be used as a guideline and should be double checked for accuracy.
Staff View
Grouped Work ID:
71ba8d6d-84dd-1b0e-c353-6ef15f7d5708
Go To GroupedWork