Eyes of the nation: a visual history of the United States
(Book) 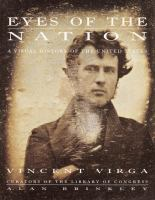 Description
Never before has America's past been made so intriguingly accessible, both to the eyes and to the mind. Eyes of the Nation profits from seven chapters of lucid historical commentary by the distinguished historian Alan Brinkley, but at its core is a bountiful narrative-in-pictures drawn from the millions of maps, prints, photographs, posters, manuscripts, motion pictures, and other treasures in the Special Collections of the Library of Congress. In vivid and inclusive fashion, the book proceeds from the first encounters of Europeans and Indians, through colonial days and the founding of the nation, industrialization and the western expansion, and the catastrophes and transformations of the nineteenth and twentieth centuries, right up to the present. Thanks to the brilliant art selection by Vincent Virga and the Library's Curators, every stage of the nation's development, every swerve in its fortunes, assumes arresting visual form. Appearing alongside such pivotal artifacts as an Indian treaty from 1714, a wanted poster for John Wilkes Booth, and a naval dispatch from 1941 ("AIR RAID ON PEARL HARBOR X THIS NOT A DRILL") are fascinating nuggets of popular culture and social history: an eighteen-pence note from 1776, the first telegraphic tape, a 1915 advertisement for the Pierce-Arrow automobile, a Pogo comic strip attacking Joseph McCarthy. Renowned American artists of every era--from John James Audubon and Matthew Brady to Mary Cassatt and Winslow Homer, from Frank Lloyd Wright, Edward Hopper, and Dorothea Lange to Robert Rauschenberg and Jennifer Bartlett--are exquisitely represented. Full, detailed captions accompany the images, and albumlike interludes explore four elemental themes of the American experience: the garden, the river, the city, and our people. In this audacious and sophisticated approach to the show-and-telling of history--as visual as it is textual, as thorough as it is irresistibly anecdotal-- Eyes of the Nation is without peer.
Also in This Series

Virga, Vincent and Alan. Brinkley. 1997. Eyes of the Nation: A Visual History of the United States. New York: Knopf.

Virga, Vincent and Alan. Brinkley, Eyes of the Nation: A Visual History of the United States. New York: Knopf, 1997.

Virga, Vincent., and Alan Brinkley. Eyes of the Nation: A Visual History of the United States. New York: Knopf, 1997. Print.

Note! Citation formats are based on standards as of July 2010. Citations contain only title, author, edition, publisher, and year published. Citations should be used as a guideline and should be double checked for accuracy.
Staff View
Grouped Work ID:
4eb740ec-3695-8cff-099d-b31a388b0f9d
Go To GroupedWork