All library locations will be closed through May 3 due to the COVID-19 pandemic. More information.

Fines will not be charged while the library system is closed. Please keep your items until we reopen. 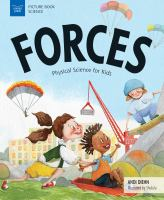 Forces: Physical Science for Kids from the Picture Book Science series gets kids excited about science! "Forces, despite its down-to-earth scientific grounding, manages to do the nearly impossible. Diehn brings gravity, magnetism, push-pull forces, and friction to life in everyday contexts, without a hint of schoolroom jargon." - Booklist (Starred Review) What keeps us stuck on the ground? What makes magnets come together? What makes one team win during a game of tug of war? Forces!

Our world operates the way it does because of forces. Gravity, magnetism, pulling and pushing forces, and friction are some of the many forces that affect the way we move on Earth.

In Forces: Physical Science for Kids, kids ages 5 to 8 are encouraged to observe and consider the different forces they encounter on a daily basis. By recognizing this basic physics concept and identifying the different ways it is demonstrated in real life, kids develop a fundamental understanding of physical science and are impressed with the idea that science is a constant part of our lives and not limited to classrooms and laboratories. Simple vocabulary, detailed illustrations, easy science experiments, and a glossary all support exciting learning for kids ages 5 to 8. Perfect for beginner readers or as a read aloud nonfiction picture book!

Part of a set of four books in a series called Picture Book Science that tackles different kinds of physical science (waves, forces, energy, and matter), Forces: Physical Science for Kids pairs beautiful illustrations with simple observations and explanations. Quick STEM activities such as rubbing surfaces together to produce heat and testing the properties of magnets help readers cross the bridge from conceptual to experiential learning and provide a foundation of knowledge that will prove invaluable as kids progress in their science education.

Perfect for children who love to ask, "Why?" about the world around them, Forces satisfies curiosity while encouraging student-led learning.

Picture Book Science presents real-world examples of physical science and engineering topics kids find fascinating! These nonfiction picture books consist of engaging narratives paired with brightly colored, whimsical illustrations drawn by an accomplished scientist. With these books, readers ages 5 to 8 are encouraged to expand their definitions of the words "force," "matter," "energy," and "wave." Elementary-aged children are equipped to recognize basic science concepts and identify the different ways they are demonstrated in real life, while being impressed with the idea that science is a constant part of our lives and not limited to classrooms and laboratories.

Titles in the series include: Waves; Forces; Matter; and Energy.

Note! Citation formats are based on standards as of July 2010. Citations contain only title, author, edition, publisher, and year published. Citations should be used as a guideline and should be double checked for accuracy.
Staff View
Grouped Work ID:
ad5c0b34-f119-e8d3-f7c6-c0b28afc7087
Go To GroupedWork