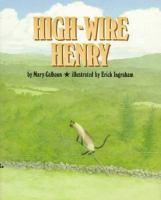 Description
What's so cute about a little brown dog, anyway? And why does everyone think tie's so clever just because he can catch a ball in his mouth? That's what Henry wants to know!

When The Man brings home a new puppy named Buttons, the spunky Siamese is no longer the center of attention. But he'll show them. "Yow-meowl! Isn't he the best hind-leg walker on four feet?

So Henry climbs a tree, stretches his whiskers for balance, and starts to tightrope-walk along a branch. But nobody is impressed -- until Buttons gets himself into a fix and only an aerial artist like Henry can save him.

Description
Although Henry the cat learns tightrope walking only to impress the humans in his family, who have stopped paying attention to him because of their new puppy, his skill comes in handy when the puppy gets stranded on a high ledge.
Similar Series From NoveList
Similar Titles From NoveList
Similar Authors From NoveList
Borrower Reviews
Editorial Reviews
Published Reviews
Citations
APA Citation (style guide)

Note! Citation formats are based on standards as of July 2010. Citations contain only title, author, edition, publisher, and year published. Citations should be used as a guideline and should be double checked for accuracy.
Staff View
Grouped Work ID:
6066b733-bb36-d773-80e7-ab2cd53a4ad2
Go To GroupedWork