The Severn Library will be closed from February 1 - 21. It is currently unavailable as a holds pickup location. 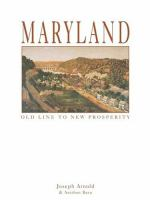 Description
If mere survival was foremost on the minds of early American settlers, Marylanders basked in luxuries: oysters reputedly as large as horses' hooves; the finest peaches in the world; a healthy, moderate climate conducive to all types of agriculture; and forests teeming with game and fowl. Later generations thoroughly explored, sometimes exploited, and always expanded upon the natural resources which would render the state an economic leader. Maryland: Old Line to New Prosperity presents far more than a glowing inventory of the state's infinite riches. It is also a saga of increasingly sophisticated economic development. Late nineteenth-century watermen, encouraged by packers, thoughtlessly overharvested oysters to the point of strangling a viable industry. Conversely, the resurgence of the Baltimore harbor encompassed many years of innovation, planning, and cooperation between the public and private sectors. Most importantly, the Old Line State's distinction as an economic leader results from the efforts of individualistic people. The English, Scottish, Irish, German and Welsh immigrants who mined Western Maryland not only secured the area's economic well-being, but created a congenial, cultured lifestyle uncommon to most coal regions. In turn-of-the-century Baltimore, a handful of German Jews catapulted their new hometown into national prominence as a center of the clothing industry. This drive and ingenuity still flourishes today: native-born and Maryland-educated professionals make the Washington suburbs a mecca for research, development and high technology. Biographies of many of Maryland's widely diverse businesses and organizations are showcased in a special chapter titled "Chronicles of Leadership." An illustrated timeline of significant events supplements the text, and puts it all in perspective. The engaging prose is enhanced with information-packed charts, vintage photographs, illustrations and a sparkling array of color images that further serve to portray both the "old line" and the "new prosperity." Maryland: Old Line to New Prosperity will inform and delight long-time residents and newcomers alike. In the years ahead, this volume is certain to prove a valuable reference, as well as a handsome addition to the library of every friend of Maryland. Book jacket.
Also in This Series

Note! Citation formats are based on standards as of July 2010. Citations contain only title, author, edition, publisher, and year published. Citations should be used as a guideline and should be double checked for accuracy.
Staff View
Grouped Work ID:
23894a55-9fb4-4fc0-199e-4c8b577b391a
Go To GroupedWork